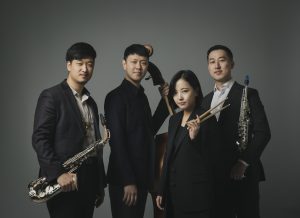 Soojin Suh Chordless Quartet is a team formed by Korean creative music artist and drummer Soojin Suh. The team released their album, “Strange Liberation”,  in April, 2018.  The concept of the chordless project is to explore freedom from all polyphonic instruments as a metaphor for freedom in society. In an era where individual freedom is becoming increasingly important, freedom of the individual which lacks consideration for others can erupt, at times, into violence against others. This idea sits at the heart of the Chordless Project. The exclusion of polyphonic instruments, which normally supply the harmony, creates higher degrees of freedom for the remaining instruments. Rather than erupting into chaos on stage, the interplay between the group members, embodying civility, testifies to the ultimate freedom and beauty that can be created through consideration for others.

The interplay, in freedom, between the four skillful members of the team results in exceptional performances throughout “Strange Liberation”.